Through the course of history, pawning has provided individuals and families fast cash on interest in exchange for valuable items.

Pawnbroking goes back to the Middle Ages in China as an avenue of granting credit to those who need them. It also thrived in Greece and Rome and in fact was the primary means for merchants to jump start their small businesses. Pawnbroking used to be very controversial back then since there was no measure of control. Those who were in the pawnbroking industry took advantage by hiking up interests, until the Catholic Church stepped up to place restrictions on charging interest. In the 18th century, the Pawnbrokers Act of 1872 was placed and has set reasonable guidelines that are still relevant to the current pawning industry that we have to this day.

Kings and Queens Who Pawned

The History Channel online mentioned that King Edward VIII was known to pawn his jewels to the Lombrads of England in the 1300’s to finance the war against France. While Queen Isabella of Spain is said to once upon a time pawned her jewelry to fund the expeditions of Columbus.

During the Era of Great Depression, when one bank after another succumbed to bankruptcy, pawning remained to be the only form of institution that provided cash for those who need them.

Cebuana Lhuillier and Pawning in the 21st Century

Fast forward to the 21st Century, pawning is still very much present and pawnshops exists as legal financial institutions that offer other valuable services beyond pawning. One of the many known names in this department is Cebuana Lhuillier.  And more than just a known name in this industry, Cebuana Lhuillier is in fact named by Forbes.com as one of the 40 Heroes of Philanthropy that is making a mark in Asia. I believe that alone tells a lot about a company. 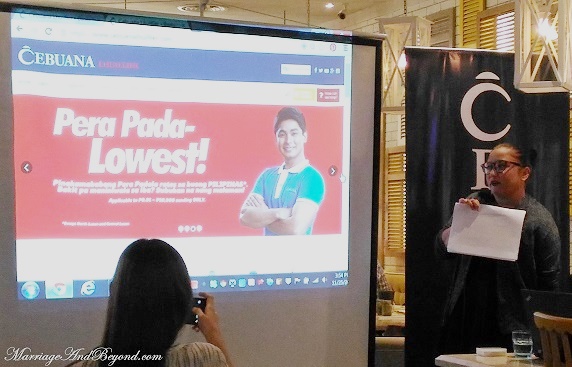 Camille Lhuillier recently introduced the newly launched website of Cebuana Lhuillier at an intimate gathering I was privileged to attend.  In this digital age, I personally believe that a brand’s online presence is necessary. It gives a sense of security to its patrons as it widens the brand’s reach by allowing for those who are “not in the know” to learn more about their offerings.

And for people to know Cebuana Lhuillier’s offerings beyond pawning is one of the brand’s goals. Being a widely-used financial institution, its customers will have better access to information on their remittance, insurance and pawnshop at a touch of a button.

Cebuana Lhuillier is your one-stop website for remittance, insurance and pawnshop needs. It means to give its clients 24/7 access to everything Cebuana Lhuillier. And for someone who’s relatively new to being online, Cebuana Lhuillier makes sure that the user experience is optimized, with its friendly interface and website’s fast loading. It doesn’t need a techie to figure the site out.  Making congratulations in order, as the brand resolves to serve its patrons better. 🙂

The mobile-version of the website is designed to be easily navigated through a mobile device.
According to Afrizal Abdul Rahim, Ericsson Head of ConsumerLab for Region South East Asia and Oceania, “The increasing availability of affordable smartphones, internet access and mobility is enabling more consumers to access the benefits of the Networked Society. In fact, in the Philippines smartphones are the primary way of getting online.”

In an imperfect world, and life in general, financial challenges come and for as long as the pawning proceeds don’t go to sustain a vice, considering it makes sense for as long as there’s a goal and plan to get out of financial rut. Cebuana Lhuillier goes beyond pawning services as it assists Filipinos in their financial needs. We’re personally considering their insurance offering even as our house’s fire insurance is set to expire in a few months.