Hospitalized due to Pneumonia

After almost six days in the hospital, I am finally home! And because you can never really get a good night’s rest in the hospital, I slept in until 10:30 A.M. today! Something I have never done in decades.  The last time I got hospitalized before this was 5 years ago, when I miscarried. I would not have thought I would have to spend almost a week in the hospital just a month apart from our son’s hospitalization because of stomach bug and dehydration.

If you’re a parent and you have sick child to look after, chances are you also get your own health jeopardized by staying up for several consecutive nights looking after your child, sponge bathing or just plain monitoring his temperature. That is exactly what happened last month. When our son’s immune system went down due to dehydration, he developed cough and colds and we naturally contracted them.

Then complications arose when I figured I was not getting well despite the antibiotics and mucolytic the doctors have prescribed. It was two Sundays ago when I fell ill with fever. Had myself checked the day after and sure enough, my chest x-ray showed I had Pneumonia. Hence, the hospitalization. I thank God that my son’s x-ray result was negative. Although I was practically fever-free from the second day of my confinement, I had to stay put so I can finish the course of the antibiotics that was given to me via IV. 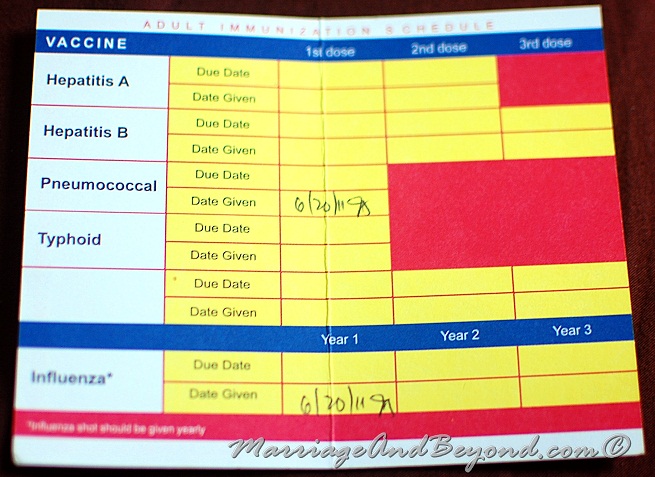 Apparently, a Pneumococcal Immunization does not exactly cover you from having Pneumonia. I was perplexed! What on earth was the Pneumococcal Vaccine is for if I won’t be protected from Pneumonia after all? Aside from asking the doctor about it, I also did my own research before I submitted myself for confinement.

Pneumococcal vaccination does not protect against pneumonia caused by microbes other than pneumococcus bacteria, nor does it protect against pneumococcal bacteria strains not included in the vaccine. It is reassuring do note that of the 80 different serotypes, the vast majority of infections are caused by the 23 serotypes contained in the vaccine.

In layman’s term, since the Pneumonia I contracted was caused by a complication of a withstanding illness (cough and colds), it is basically not covered by the immunization I had last year. By the looks of it, we did not welcome 2012 with a very healthy start. But as sure as I bade the lovely nurses  goodbye yesterday of Jesus Immaculate Conception Hospital in Marikina, we resolve to be healthier the rest of the year, by God’s grace. And for the record, I am no longer contagious. 🙂 The awesome cocktails of antibiotics Dra. Zulueta treated me with via IV did its job real well. Yes, my son and I have the same doctor. We switched to Dra. Zulueta years ago. There’s nothing like having a doctor who is God-fearing and loves the Lord. I was surprised to learn just recently that she is already 70 years old. She doesn’t look it. God sure is sustaining her as she remains sharp, active and wise. Here’s praying that our family will be healthier the rest of the year. 🙂