We booked our stay at West Hotel in Kowloon, Hongkong via Agoda.com a few months after we booked our plane tickets. With all our previous bookings with Agoda, I can pretty much vouch to this day that all were hassle free. A week before we flew to Hongkong, I emailed West Hotel to confirm our booking. I would usually call overseas to confirm but tried emailing this time around. They were pretty prompt with their correspondence. I got a reply within 24 hours with our hotel confirmation number.

West Hotel has courteous and accommodating staff. We have no complaints. We were hoping to book a room in Disneyland Hotel but unfortunately, there was no available room for our travel dates. It took quite a while before we settled with West Hotel. There were a few reviews of West Hotel that mentioned that rooms were too small even for Hongkong standard. But I’ll get to that shortly.

We arrived a little too early for West Hotel’s usual check in time, which is 2:00 P.M. When we got there around 10 in the morning, the staff offered to keep our bags as we wait for our room to be available.  We had the bags deposited and they placed them behind the reception counter. I asked if there’s anything I need to show to claim the bags, hoping she’d hand me a claim tag or something. But I was just told that all I need to show is my passport to claim our bags later. 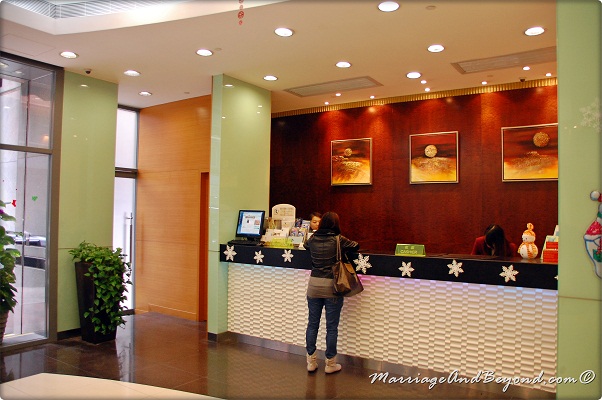 We left it at that, but I did hope somehow that they at least give us a piece of paper that proves that we left this number of bags with them. I guess that’s more of Filipino mentality in me. Since we know for a fact that it’s generally not safe to do that back home. Happy to report that we claimed our bags hassle free. There are hotels aplenty all over Kowloon, I’d say West Hotel is in middle of the pack. I think one of the best things about West Hotel are the handful of good restaurants around it.

While waiting, we figured we’ll have our brunch at this dimsum place around the corner. It was the first dimsum place we saw and checked out. It also was the cheapest that we’ve been to during our stay in Kowloon, Hongkong. I love their Rice Sheet Roll w/ Shrimp the best! I’ve had it in other restaurants during our stay with pricier tags but theirs is the best, by my tastebud’s standards. I can only wish I know what that restaurant is called.

We’d always feel relieved whenever we see menu w/ English translation. Otherwise, we have no choice but to settle to pointing to pictures and some universal sign language. Not a lot of people in Hongkong can speak good English. We also made use of the little Hongkong pocket guide we have with us.

Fresh from the airport and ready for  an authentic dimsum brunch

We did not eat much for brunch since we were all looking forward to get settled in our room. For our first meal in Kowloon, we spent approximately HK$90. The cheapest of all our meals during our stay in Hongkong.

We headed to a nearby park after brunch and went right back to the hotel shortly after. We took a chance that there might be an available room to check us in early and there was!

I was pleased when I saw that West Hotel has a 13th floor. I would not have expected one in a Chinese country.  Coming from a country bombarded with silly superstitions, I was relieved to be in a hotel with predominant Chinese population that obviously did not patronize the superstition of having to omit the 13th floor.

The double doors leading to our Room 1302

Note on the door reads: Smoke Lobby Door. This door prevents fire and smoke from spreading to the stairway. Keep it closed at all times.

There was this one night the fire alarm went off and when we called the front desk, we were told that it has been taken cared of. One of the guest’s children must have played with the alarm.

When we booked with West Hotel via Agoda last year, there was only the Standard Room available. So that’s what we got.  The room was tiny. Yes, even by our Asian Filipino standard. The three of us would bump with each other as we move around the place. There was hardly any place for our luggage too. But it was fine with us, since we really don’t plan to stay around the hotel a lot.

Here are the things West Hotel’s Standard Rooms DON’T HAVE: Closet w/ enclosure, safety deposit box, restaurant, WiFi. Their having no restaurant is forgivable. Since you can choose your pick as soon as you step out of the hotel.

Bathroom with a stand up shower and a lavatory. It is so small that the door won’t fully open because the door will bump on the lavatory.

The bed was awfully hard on the back, I should say. The hardest bed I got my poor back on ever.  I saw from the Trip Advisor that a lot of other West Hotel guests have that for a common complaint.  But the tiny room and the hard bed are small price to pay for such outstanding location.  Besides, I read somewhere that lying down on a hard bed is in fact good for your back.

Basics of hotel amenities are included: fridge, cable television, air conditioning, blower, desk. We barely made use of the air conditioning though. The coldest was 15°C.

Here’s a screencap of what the weather was like when we were in Hongkong International Airport shortly before we boarded to fly back to DMIA in Clark, Pampanga, Philippines.

I again took a photo of the clock beside West Hotel’s front desk upon check out. Yes, I noticed too that the temperature slot remained at 25.8°C from the time we arrived three days back to the time we left.

There’s more to love about West Hotel’s location. Temple Street, for instance, where the popular Night Market happens is just a few blocks away. It is where we did our quick pasalubong shopping after our Hongkong Disneyland tour, which I will also later blog about.  West Hotel is also located at the heart of the Jade/Jewelry market of Kowloon. This is hard to not notice. Rows upon rows of jade stores right there.

West Hotel’s location totally makes up for its few shortcomings. Close to the markets, Jordan and Austin mtr stations, parks and shopping areas, restaurants, even the Airport Express Station.  Us doing a repeat at this hotel, we might just consider. But their rock hard beds would really make me think again. West Hotel’s published rate is US$104/night. We were able to book for three nights via Agoda for around US$270.