So, I did not choose to brave the Bungee Fun attraction at Eastwood. I am too much of a coward like that. But what I was able to  do was cover comprehensively, each and every blogger participant’s bungee experience. Seeing all these shots just makes me want to consider trying it out. But from how my stomach churned just watching them last Friday, I am pretty sure I will still be all good at taking pictures next time. Unlike the hubby, I am not very adventurous.

Here are some pictures the hubby and I took from the Bungee Fun date in Eastwood.  First, the guidelines: 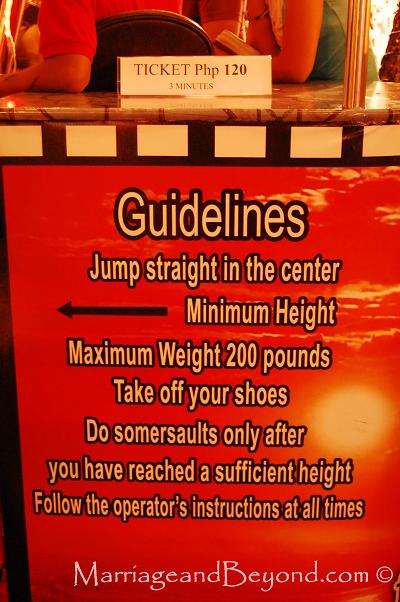 Who would have thought an attraction such as this will fit in what might as well be a packed place, Eastwood City already is.  It is located right smack across Pho Hoa, near Jack’s Loft and Dulcinea, which I think is very strategic.  People will just have to stop and watch such bungee fun.  This is exactly what happened when one girl went flipping and flopping in the air, with her crazy somersaults and fun air dancing.

I’ve always known Earth to be an adventurous girl and last Friday was another affirmation of that when she went to be the first one to brave the heights. It was crazy. I was pretending all the while that it’s not scary, but all the denials when crushing down on me, when I heard Earth herself gush and squeal her lungs out begging her to be let down.  But I saw she had fun nonetheless.  She’s really just one brave soul.

Here is dear hubby who has been ecstatic throughout the day. Ever anticipating the bungee fun he’s gonna have before the day ended.  I saw a little disappointment on his face when we found out it wasn’t the real bungee thing.  He did have a great time though, as I saw him doing his somersaults in the air like a real acrobat! I just thought right there over again that I did marry a crazy guy and I love him to bits.

that’s Jeff flippin’ in the air

Jonel getting ready to fly

Brian did not show any fear at all.  He was just calm through and through.

Jeff Siy having the time of his life. These guys sure made everything look easypeasy.

And you should have seen how Dani danced in the air. I loved her poses.

This will hands down, singlehandedly tell you how fun Bungee is! That is PinayAds.com herself, Iris.  For a while, this picture almost made me regret not trying it myself.

I love just how fun is spelled all over Azrael‘s face. Makes me rethink of really trying it out for myself. 🙂

To add to the already fun Bungee attraction are these percussion guys drummin’ away.

This certainly gives us yet another reason to go back to spending family days in Eastwood.  This is where Jeff “formally” asked me to marry him in 2001 and now that the “city” is made even more exciting – no signs of wavering in that aspect, despite the years, I think even our little guy will have a grand time just strolling around, maybe even try out Bungee Fun himself. 🙂