How Antipolo Police responded to road accidents we met

Here’s hoping that this reaches the concerned authorities of lower Antipolo. Last Christmas day, our car was bumped by an L300 container van, with four adult passengers and a baby sitting up front. All of them were not wearing seat belts. We were already crossing the intersection, Jeff tailing the crossing cars to the other side and the L300 sped off to bump our left fender. Looking at the pictures alone will tell you whose fault it is. 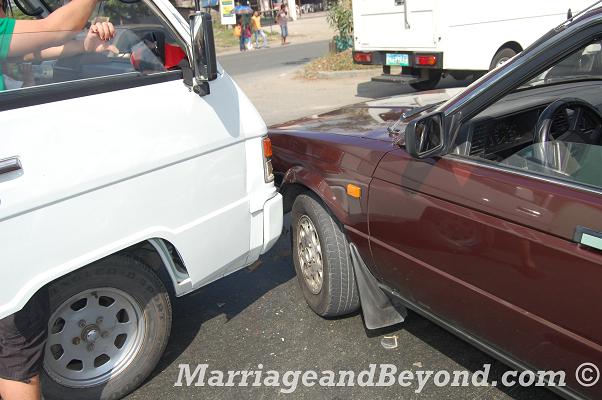 Although the driver did not exactly voice out owning up to his fault, he was willing to wait for the police officer to do the investigation. But after an hour of waiting, no police officer showed up. It could be that it is Christmas day but even then, a police on duty should be available for roadside assistance and even during accidents such as this.  We ended up just agreeing that we just leave things as is, we were already getting toasted in midday heat for almost an hour.

Three of the other passengers left in a cab, including the baby and if there was a lesson that they need to be told is that they shouldn’t drive without seatbelts and they are practically just putting the baby in danger by crowding in the front seat, all four of them and a baby.  One of the lady passengers scratched her knees which was essentially because she was not wearing a seatbelt and wearing a seat belt was not possible if there are four adults riding in the front seat with a baby.  Thank God nothing happened to the baby! But what they did was just plain suicide, if you ask me.  To think that the driver was holding a professional license, this is really one unthinkable thing and on a Christmas day, at that.

I remember so many years back (around 2002) when a similar accident happened in Masinag and a colorum jeepney beat the traffic light, sped off, peeling off the Corolla’s bumper the hubby was driving. The police was there all right but after a handful of follow ups, all they did was charge us with hundreds of pesos for what they said to be for the “official photos” (P150/photo to be exact) that needed to be submitted alongside the police report. We wouldn’t have minded, except that we know better that in 2002, that P150 cost for developing should be good for at least one roll of film of at least 24 pictures. With these encounters that we’ve had so far with Antipolo police officers, I am left to conclude that they are so unreliable, not to mention corrupt. We ended up dropping the case altogether. There was also a time when my folks’ house was broken into by thieves and it took a long time before they came and nothing happened out of investigation.  This is one of the major reasons living in the Philippines is so frustrating. I hope this reaches the Antipolo local government and do something about their local police officers.