This was taken Sunday, September 27, 2009 at 8:19 AM, the day following Typhoon Ondoy’s wrath. The flood has receded approximately a couple of feet since the rain stopped. Took this shot from the room we stayed in at the neighbor’s.  That’s my son’s bicycle.  The night before, it was completely covered in flood water. Barely slept,  following closely the flood’s developments.  Although we were on the second floor, even during the rain stopped for a while, the flood continued to rise.  We didn’t know where to head to next in the event that the flood would reach the second floor.  It helped that the neighbor’s house has high ceilings.  I reckoned, it was gonna take a great while before flood reaches our floor.  But now that I come to think of it, if the rain refused to stop, it was not far from happening.

Tuesday, September 29, 2009 at 2:03PM. Three days of cleaning up and still not half done.  Everyone in the family is tired. We are blessed to have my reliable weekend helper report everyday for work this whole week.  It helped that classes were suspended.  That made her available, she has 4 girls.

My folks’ place suffered a more terrible plight.  Their house has wood parquet flooring. All the installed wood tiles came off and the Narra plywood walls also peeled off.

The height of the flood went above the console table where their LCD television usually sits. It was good that Jeff and BIL decided to carry it to the second level of the helper’s double deck bed.  They also got our LCD tv carried to the same bed.  If it weren’t for BIL’s suggestion to get them transferred, both tvs would have been dead by now.  It was good that our contractor used marine plywood for our closets.  It made our closets practically invincible in the flood.

Sunday, Sept. 27 at 11:06AM.  This became a common scene in our street.  People were using air beds as raft, helping them to be transported to dry land.

As shocking and uncertain things were during these times, we did not allow our circumstance to rob us from counting our blessings. We have each other and that’s what matters most. My boys wrestled and played around at the room where we stayed in at the neighbor’s, as we waited for the flood to subside. 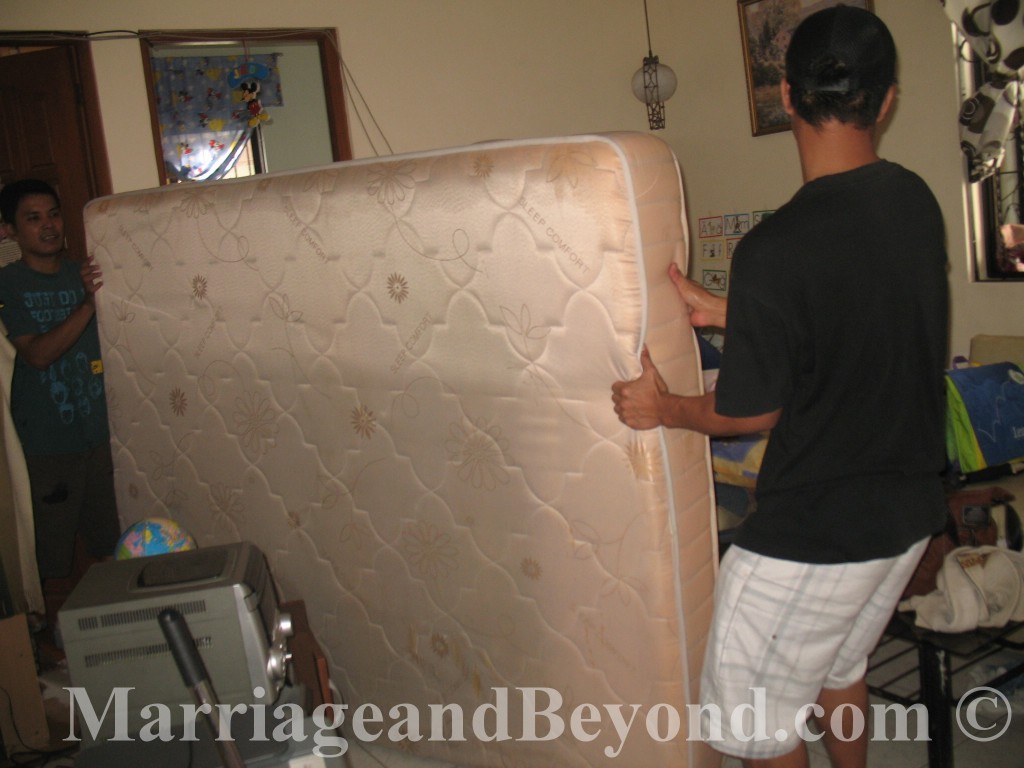 … hello queen sized banig.  Thanks to the beautiful people of UCPB who brought us the banigs, mosquito nets and food, we actually had a place to sleep on the night we came back home.  No electricity yet, but Jed was thrilled to have the mosquito nets installed.  A first for the both of us.  It wasn’t long after that we declared it as camp time and played chase the lights. Jed and I, armed with pen flashlights, while Jeff with the giant one. 🙂

Jed wearing a borrowed pair of shorts from his Ninong Ted (BIL). The waist fitted perfectly, it looked like a local “puruntong.”  We had to be creative and make use of whatever was left of us. We were not able to salvage our clothes.  Jed’s clothes sit on the lower portion of his closet. The manual laundry that we do, won’t get the clothes dry when we need them, given the rainy weather.  But we were all right.  Heroes came to our place just in time to bring in the things we needed. They braved the mud, the unbelievable dust, traffic and the undeniable stench that came in as the flood waters receded.

Thank you, UCPB people for bringing in food and a lot of other things that we need.  Alvin and Diane for refilling our water containers, bringing in clothes we could use. Tita Sally for the canned goods, clothes and grocery cash.  The night before the UCPB people came, Jeff and I went to buy food from 7/11 but they ran out of supply.  The only supermarket that was open that time did not accept credit cards for payment and ATMs won’t dispense cash.  It was an unbelievable moment for Jeff and I, but it was also a perfect time to just allow God to show Himself mighty in such great time of uncertainty.

The  day after, my dear friend, Frances, also came and gave us the underclothes that we badly needed, toiletries, towels, shirts and shorts.  We were able to bring some of the bags of wet clothes to the laundry shop but with the volume of jobs that they received, our clothes won’t be available until Sunday night.  Until then, there will be nothing for us to wear. What these beautiful people gave us meant a real, great deal. Thank you so much!

My former officemate, Lelet, called in Monday night and volunteered to come the next morning to pick up my mobile– she will charge it at her home (our electricity wasn’t back until Tuesday night).  When she came the next morning, she handed us a loaf of bread, which we just ran out of.   She volunteered to lend her car as well, so that Jeff will be able to tow the car to the repair shop.  We were also able to bring the bags of wet clothes to the laundry shop because of her.  Our hearts are definitely filled by God’s goodness through all of you.

The Lord showed us His grace through these wonderful people He used to minister to us in our time of great need. His grace is sufficient indeed.